SkypeRead in action: students at Omi Brotherhood High School in Japan do a read-through with students at an Alma College science summer camp in the USA. (Video courtesy of Andy Smith.)

SkypeRead is a communication and teambuilding activity for remote, cross-border teams that use English as a working language.

The team meets in a Skype group video call and does a read-through of a movie script, with each participant playing a number of characters in the movie.

The aim is to recreate the emotional elements of a real-life read-through – professional actors often report feeling a “first day at school” mixture of excitement and fear – and to use these for improving English-language communication skills and teamwork.

What is a read-through?

It’s one of the early stages in the process of making a movie. The actors – together with other key personnel such as directors, writers and producers – sit down around a large table and, very simply, read through the script. It’s sometimes called a table read. 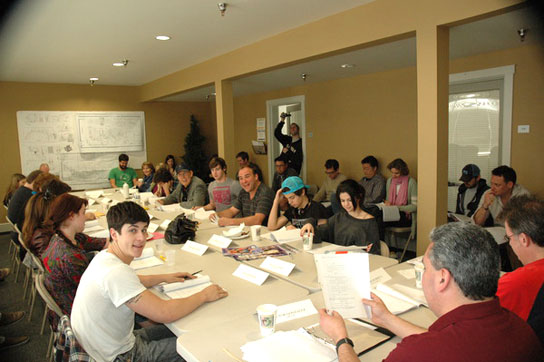 I asked Eddie Jemison, the actor best known for his roles in Ocean’s 11, 12 and 13, about the teambuilding element of read-throughs. “I think they’re really helpful,” he said. “It makes everyone realize they are all pulling for the same cause. It gives the experience shape and purpose. Without a read-through everyone is just guessing at how all the parts fit together. Plus, it’s fun and every one feels more a part of a team. And teamwork is always better than the sum of the work of individuals.”

Which movies do we use?

With the kind and generous support of Start Motion Pictures, the Bombay Sapphire Imagination Series, and Wes Anderson, we’re currently using the scripts of these three brilliant movies.

How does a read-through help non-native English-speakers?

Movies use the kind of language you find when you go out of the classroom and into the real world, as I explain below.

Also, a Hollywood-style read-through can be a highly effective teambuilding exercise, as the following article highlights.

Since we launched SkypeRead in 2013, we’ve done remote read-throughs with students from more than 25 countries, and achieved some fascinating results.

In 2014, together with Walter Klinger and Martin Stack from the University of Shiga Prefecture (USP), I presented results from a three-month investigation into movie read-throughs at the National Convention of the Association for Teaching English through Movies (Fukuoka Jo Gakuin University, Japan). This cross-border study involved students from USP and three other universities: Kwangwoon University in Korea, Hong Kong Baptist University, and the Universitat Politècnica de València in Spain. (A paper on this study was published in ATEM Journal: Teaching English Through Movies, Volume 20, March 2015.)

The following comments, for example, are from three Spanish students who took part in the study.

Want to know more about SkypeRead, movie scripts and read-throughs? We’ve put together a page of links here.