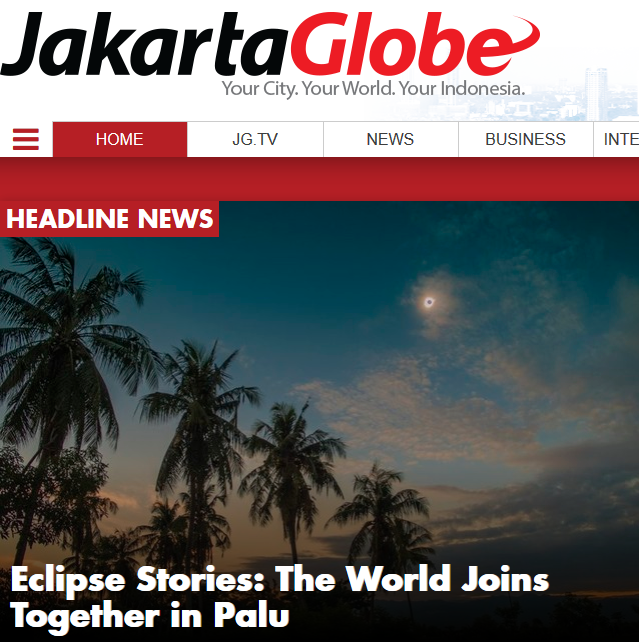 The Jakarta Globe has published a follow-up piece on our Tadulako University/Western Kentucky University collaboration.

The photo is by the amazing astrophotographer Juan Carlos Casado.

In Palu, they will tell you that their city is the centre of Indonesia: after all, the island of Sulawesi is situated in the middle of the Indonesian archipelago, and Palu is the capital of the island’s central region.

Needless to say, there is a little bit of local bias at work: technically speaking, the geographical midpoint of Indonesia is closer to Makassar. Nevertheless, for two minutes last Wednesday morning Palu was arguably the centre not only of Indonesia, but the whole world. A combination of geography, accessibility and weather prospects made Palu the prime location for observing the total solar eclipse of March 9.

Tadulako University (Untad) – whose sprawling campus lies a few kilometres to the north of Palu – was at the heart of the action, in terms of both science and international collaboration. On March 8, the university hosted a packed-out seminar featuring speakers from Asia, Europe and North America. Darmawati Darwis, the head of physics at Untad, highlighted the uniqueness of eclipses as natural phenomena; Thomas Djamaluddin, the chairman of Indonesia’s space agency LAPAN, reported on the preparations being made across the country; and Miquel Serra-Ricart, from the Instituto de Astrofísica de Canarias in Spain, shared his experiences from leading eclipse expeditions across the globe.

Richard Gelderman, a professor of physics and astronomy at Western Kentucky University in the USA, talked about the solar corona, the outer atmosphere of the sun that, counter-intuitively, is hotter than the surface of the sun. “Why is the corona hotter than the surface?” he asked. “We think we know, but we don’t know the details.” Accompanied by Honor Hare, one of his students, Dr Gelderman was teaming up with Untad students to test equipment and procedures for CATE, a citizen-science project that aims to get 90 minutes’ worth of data on the solar corona when a total eclipse crosses the USA next year.

The following morning, the action shifted to Kota Pulu, a small village just south of Palu, slightly closer to the ‘centre line’ of the eclipse. The motorcade of Vice-President Jusuf Kalla created an incongruous site as it sped down the narrow road that runs alongside the Palu River, shortly after sunrise. The CATE team was set up on a rooftop with a perfect view as ‘first contact’ – the moment when the moon takes it first bite out of the sun – came at 7:27 a.m. Back on the Untad campus, meanwhile, Dr Serra-Ricart and his group were broadcasting the eclipse live (a recording of the broadcast is available at sky-live.tv). In a generous and globally minded gesture, the university shut down its entire IT network so that its bandwidth could be devoted solely to the broadcast.

For the next 70 minutes, the moon slowly ate its way through the sun’s disk, until 2 minutes and 25 seconds of ‘totality’ began at 8:37 a.m. The solar corona – which only becomes visible during a total eclipse – revealed itself as a shimmering plasma surrounding the sun. And the corona was not the only thing on show. “Venus is shining brightly,” exclaimed Paul Cox, an astronomer doing English-language commentary for the broadcast from Untad. “We’ve got totality here, it looks absolutely extraordinary. I can even see Mercury now. I can see Mercury between Venus and the sun and moon.”

On the rooftop in Kota Pulu, the CATE team got all the data they needed – this will be studied carefully over the coming weeks and months. But for the team members, the project was about more than just the scientific output it produced. “This was all about collaboration,” said Famri Rusdin, a third-year chemistry student at Untad. “Making connections, building relationships, that’s the wonderful thing.” Honor Hare agreed, saying simply, “An experience way beyond anything in my life.”

Graham Jones runs a Global Communication and Science program, sponsored by Garuda Indonesia. His presentation at the Tadulako University seminar on March 8 was entitled “Solar eclipses as an opportunity for public engagement with science”.